This week we hear of a continuing stand off between protesters and contractors on land recently compulsory purchased by East Sussex County Council to build the new link road between Bexhill and Hastings. 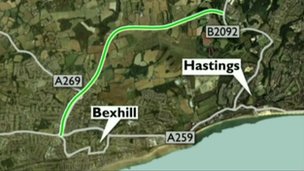 This £94m project will transform the economic landscape for the people of Bexhill, Hastings and the surrounding areas and is long overdue and much needed. East Sussex County Council Leader, Cllr Peter Jones, said: ‘This road will bring real benefits to Hastings and Bexhill, including better access to jobs; fewer cars using roads that aren't suitable for them; opportunities for housing and business development; and a reduction in the number of accidents on local roads.The road will make it possible to build 1,200 to 2,000 new homes and business park space of 50,000 square metres."

However following the recent approval of local NHS Trust plans to centralise certain hospital services at Eastbourne and Hastings, the need for this vital road improvement is even greater. Residents in Hastings or Eastbourne could quite literally loose their lives in transit whilst making the difficult and dangerous journey to either hospital in an emergency, especially in rush hour periods where the journies would take even longer.

But according to Combe Haven Defenders, the group responsible for the direct action, the contractors were met with opposition from around 30 protestors who blockaded an access road and then positioned themselves among trees. A spokesperson for the group said it believed the road would become ‘a national issue’, and an increasing number of protestors would come down to the site.

I hope very much that strong action will be taken to arrest and remove protesters who obstruct the process of building this road. For the campaign group to suggest this is a national issue is concerning, it implies that they are calling for additional like minded protesters to come and join them wherever they live. The campaigners have to realise that they have had their chance and they have failed to convince a robust and public process that their argument should prevent the construction of this vital road, they should now step back and allow it to be delivered.
Posted by Cllr Patrick Warner at 05:20