You can’t be neutral about Margaret Thatcher.

As prime minister you loved her or hated her, and sometimes I managed both. She was energy, action and outrage, a woman who stood up to her enemies and sometimes even throttled her friends. And as the official papers just released under the 30-year rule reveal, 1982 was her year of destiny.

It was a year in which she fought the Argentines, kicked the French, intimidated the Americans and made mincemeat of the Dean of St Paul’s.

She also cried a lot.

Great leaders are made by crises that destroy lesser mortals and the Falklands War was no exception. It had moments of almost comic distraction – Rex Hunt, the governor, surrendering in full colonial regalia complete with ostrich-plumed hat, MI6 agents disguised as baggage handlers with plans to hijack planes carrying Argentine war supplies. Much of it seemed to come straight out of a James Bond novel.

Maggie didn’t want the war as she would need a huge chunk of good fortune to stand any chance but she was supremely lucky with her opponents.

General Galtieri the Argentine leader was described in Cabinet papers as “an alcoholic and apparently incapable of rational thought”. Yet the odds were stacked against the British and our forces were never more than a missile strike away from disaster. In one of the most extraordinary moments, the luxury cruise liner SS Canberra was requisitioned, packed with almost 4,000 troops and vital military equipment then sent virtually unprotected into the heart of the war zone.

As a fearful Cabinet minister told me at the time: “If the Argentine air force arrives within the next couple of hours before the anti-aircraft weapons are unloaded, the ship and a huge number of troops will be lost. The war will be lost too.”

During those weeks Maggie showed she was an Iron Lady forged from the finest British steel. She swung her handbag at the French, badgering President Mitterrand into denying the Argentines the Exocet missiles they had already bought, and fought the faint hearts at the UN who wanted a ceasefire.

Yet it was her American allies whom she beat up most badly.

At times they were useless – senior US diplomats being described in one Foreign Office despatch as “fools and fascists”.

They were so desperate to remain neutral that wobbly kneed secretary of state Al Haig even threatened to reveal to the Argentines our plans to retake the islands. To the very last, even as British troops stood on the outskirts of Port Stanley ready to retake the islands’ capital, the Americans were urging compromise.

Maggie was having none of that. Time and again she told her great friend President Ronald Reagan that she wouldn’t do it.

“Britain has not lost precious lives in battle and sent an enormous task force to hand over the Queen’s islands,” she told him. It was an echo of Winston Churchill who, during the Second World War, declared that: “I have not become the king’s first minister in order to preside over the liquidation of the British Empire.”

She was Churchillian. Stubborn.

Determined. She had no time for muddled minds. When the Dean of St Paul’s suggested the thanksgiving service for British troops should include the Lord’s Prayer read in Spanish she dismissed the idea with a contemptuous: “Why?” Yet there was an entirely different more vulnerable side to her. Weeks before the Falklands War her wayward son Mark disappeared in the Sahara desert while competing in a car rally. She was distraught.

"Her daughter Carol said her mother was “completely unable to function”.

Husband Denis was hauled from his bath and dispatched to the desert to help with the international search effort. Maggie “fell apart”.

When at last Mark was discovered unharmed he tried to laugh off the entire episode.
Denis was white with fury. And Maggie insisted on paying every penny of the bill, even the huge bar tab run up at the hotel after his rescue, to make it clear that her little family folly hadn’t cost the taxpayer a penny. “I must pay,” she insisted. “To whom do I make out the cheque?” The Cabinet papers paint the portrait of an extraordinary woman. She had huge courage yet was intensely vulnerable.

She was both Iron Lady and doting mother

She was scrupulously honest about the use of public money in a manner that should cause blushes among many of the current politicians. She was both Iron Lady and doting
mother. But the characteristic that above all others made her great was her willingness to risk everything for what she thought was right. The Argentine invasion, she said, was the worst moment of her life.

There were many who told her that retaking the Falklands would be impossible. It would cost her job, her place in history, everything. She simply said that it was her duty and in clinging to her duty wrote a glorious chapter in our nation’s history.

Her willingness to defy conventional opinion and her sometimes utter unreason would eventually lead to her downfall, when she would be dragged in tears from Downing Street with her fingernails left embedded in the carpet.

In 1982 that humiliation was still years away. It was a year that was to provide her finest hour. 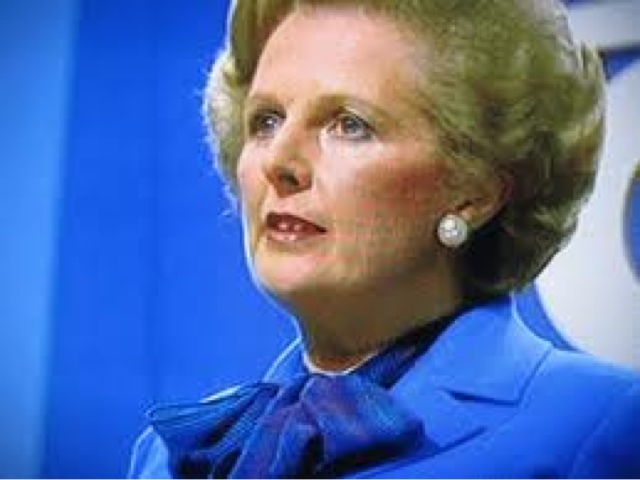 Posted by Cllr Patrick Warner at 01:32