Dr. Alex Moulton, the engineer most widely known as inventor of the Hydrolastic and Hydragas suspension, has died, aged 92.

Dr. Alexander Eric Moulton CBE, passed away peacefully on Sunday, 9 December 2012, at the age of 92. He was educated at Marlborough and Cambridge. He worked for Bristol Aeroplanes as assistant to Sir Roy Fedden during WW2.

After the war he finished his degrees in engineering and joined the family business Spencer Moulton in Bradford on Avon. Here he developed his most famous Hydrolastic and Hydragas suspensions, collaborating with his friend Sir Alec Issigonis from the 1950s onwards.

The small wheeled-Moulton bicycle was invented in Bradford on Avon around the same time and launched 1962, a later and improved design of it is still being build there by hand. Dr. Alex Moulton himself considered the bicycle his best invention.

Dr. Alex Moulton was active to the end, keeping a keen eye on engineering and education in engineering. With the 50th anniversary of the bicycle as well as of the Hydrolastic suspension, which was launched with the Morris 1100, held in 2012, he will be a great inspiration for all who use his inventions now and in the future. 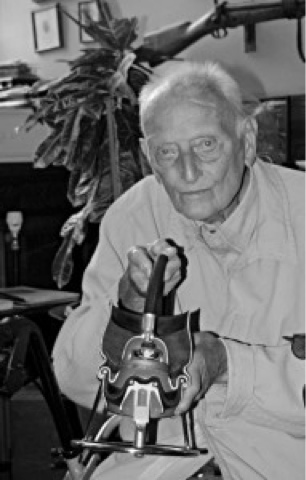 Posted by Cllr Patrick Warner at 15:44