Grant Shapps MP: Labour has taken £1 million from taxpayers for policy development. What have you done with it Mr Miliband? 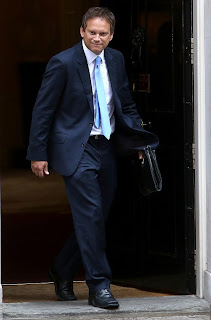 In November 2010, Ed Miliband famously declared that he had a policy ‘blank page’. At the time, he was proud of it. No more poisonous policies of the past, a fresh start under his control.
Since then, the Labour party have taken over a million pounds of public money to fund policymaking.

Money for the development of policy to Her Majesty’s Opposition is no bad thing. In the absence of civil service support, it means the opposition can fund a great deal of policy work. I know we used it; by this time in opposition it was money well spent.

By this stage of the Conservative opposition in the last Parliament, Pauline Neville-Jones had recommended the creation of a UK Border Force, a policy subsequently implemented by Labour. Peter Lilley had set out how aid should be focused on promoting economic development, which is a cornerstone of our policy now. John Gummer and Zac Goldsmith had recommended a new wellbeing index, which reported for the first time this year. And John Redwood had proposed cutting corporation tax to 25% – something the Chancellor has already surpassed.

By this time in Tony Blair's leadership Labour had a whole raft of detailed policies, from a 'University of Industry' to minibus safety, as well as major economic and constitutional reforms.
But so far nothing has been forthcoming from Ed Miliband. Nothing.


This is taxpayers’ money, and there are conditions attached. If you are taking public money for policy development, you must develop some policy.
The pressure is now on, and it’s time for Labour to step up. If they want voters to take them seriously, there are three things they must do.

First, they need to accept responsibility for the mess they created. Gordon Brown - with Ed Miliband and Ed Balls at his side - spent far too much before boom turned to bust. We went into the economic crisis with the biggest structural deficit in the G7. It’s acknowledged by Blair and Darling, as well as Mervyn King and the IFS. It’s never going away. Ed Miliband and Ed Balls refuse to accept this truth. If they ever want to be taken seriously again, they have to own up.

Next, they must present a proper plan to deal with the deficit. Addressing the CBI, Ed Balls agreed; ‘a credible deficit reduction plan is essential.’ Still, his party offers nothing and just opposes every step we take to tackle the deficit.

Finally, they need to provide that all-important substance: clear, credible and costed policies. Lord Mandelson has said that it’s time Labour’s plans took shape. Labour should listen; this is a man who knows about winning elections.

But Labour’s Policy Review, created by Ed Miliband in 2010, has yet to publish any significant reports.

It was first launched amid much fanfare under the direction of Liam Byrne, but in May he was unceremoniously sacked, his work binned and the process re-launched with Jon Cruddas in charge. What it will recommend remains a mystery.

All this blank paper does not come cheap to the taxpayer. As the Independent reported in October, the Electoral Commission gave Labour £840,691.33 of public money to work on their policies between May 2010 and December 2011.

They received another £114,153.00 for the final four months of the last financial year. They’ll also have received even more money for the first months of this financial year, taking the total to well over a million pounds. That’s how much Labour have taken from public funds since the last election, specifically for policy, with nothing to show for it.

They simply aren’t doing the heavy-lifting an opposition needs to do if they are to present themselves as a credible party of government at the next election. They’ve now got the most expensive blank page in history. I started up my own print company, so I know a thing or two about paper. This stuff must be gilt edged.

Labour's only clear plan is for £200 billion of more spending, more borrowing and more debt. That isn’t just me saying that, that's the calculation of the independent Institute for Fiscal Studies.
As Alastair Campbell said over summer, it's time for his party to be in the press 'for what they're saying about themselves'. Deliver on these tests, and Ed Miliband will go some way to silencing his critics. Fail, and he’s flunked it. But with public money disappearing into a black hole on a blank page, he’s got quite a lot to answer for.
Posted by Cllr Patrick Warner at 02:32