VETERANS of the Second World War’s deadliest sea campaign have finally had their heroism recognised.

A dwindling band of survivors of the Arctic Convoy — dubbed “the worst journey in the world” by Winston Churchill — have battled since the 1990s for proper decoration.

And Prime Minister David Cameron yesterday announced the creation of an Arctic Convoy Medal.
The mission to ferry arms to the Soviet ports of Archangel and Murmansk began in 1941 and cost 3,000 lives. More than 66,000 merchant and Royal Navy seamen ran a gauntlet of submarine, air and battleship attacks.

Conditions were so cold men lost their hands if they touched the ships’ frozen surfaces. As the Soviets became the post-war enemy, the vets never got a medal, despite Government pledges.
But a review by ex-diplomat Sir John Holmes has finally recommended the medal’s creation.
It is estimated there are now only 200 survivors left alive. 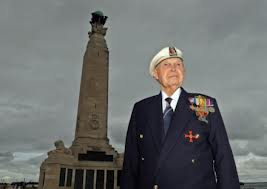 Campaign leader Commander Eddie Grenfell, 92, said: “It is wonderful news. It just saddens me that many of my chums have not survived to see it.”