Also discussed at Eastbourne Borough Council's Scrutiny Committee meeting last night was the decision made by the Licensing Committee back in January to force most cabbies (Hackney Carriages who pick up at specified ranks and Private Hire cars that you book in advance) to have permanent door signage in place of the magnetic signs that are currently in use.

I was on the Licensing Committee and voted against permanent signage back in January after considering the evidence before me and hearing what members of the trade had to say.

Members of the council were then understandably bombarded with mail from cabbies after the decision so I was very pleased when Scrutiny Committee Chairman Cllr Colin Belsey called the decision in to Scrutiny to look again at the issue.

It seems the reasoning behind permanent door signage being opted for by a majority of my colleagues in January was because a small minority of drivers are either using door signs in a degraded condition or in some cases failing to display the signs altogether. 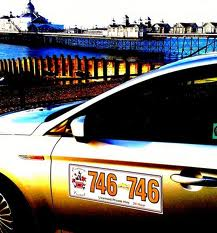 I felt it was a sledge hammer to crack a nut, after all out Police & Justice decision doesn't go round taking members of the public off the street without evidence in case they may commit a crime in the future so why not just use the existing enforecement system to crack down on the small number who may let the side down occassionally? My other concerns included the fact that as some drivers who may occasionally undertake prestige work such as weddings, could apply for exemption from the permanent signs which would cause the majority of other cabbies to incur higher costs every time they change cars or suffer accident damage without achieving a uniform standard across all of Eastbourne's cabs.

I am therefore pleased to advise readers if my blog that a much clearer majority of Scrutiny Committee members voted in favour of asking the Licensing Committee to reconsider its decision at a future meeting.

Democracy in Action!
Posted by Cllr Patrick Warner at 02:20