An investigation by Cllr Sam Chapman at the Top of the Cops blog has found that Cllr Clive Grunshaw, the newly elected Labour Police and Crime Commissioner for Lancashire, has some serious irregularities involving his expenses. 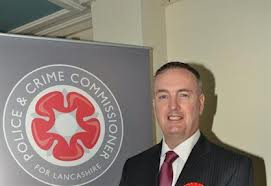 Freedom of Information requests show that he was travel and subsistence costs for going from his home in Fleetwood to Preston both from Lancashire Police Authority and from Lancashire County Council for meetings that were one after another.


"On 1 July 2010 the Police Authority claim is from 8 am to 2 pm with a 56 mile round trip to Lancaster Town Hall, whereas the County Council has a claim from 12 noon to 5 pm and a 46 mile round trip to County Hall in Preston. The direct route from Lancaster to Preston is 23 miles, which is 28 miles less than the amount claimed when travelling via Grunshaw’s home. Time travel is clearly demanding in calorie terms, as both claims involve claims for food from the taxpayer (£7.45 and £11.62 respectively). The authorities have no records of the receipts."
Cllr Grunshaw accepts there are discrepancies. He says they are innocent mistakes. The difficulty with accepting that explanation is that there are so many of them.

He has offered to pay back the money - that isn't good enough. Imagine if he told the police officers of Lancashire to apply such a lenient approach.
As the Lancashire Evening Post summed it up:


"The documents appear to show that in nine of the 23 expense claims - that were submitted before he was elected as PCC last - Coun Grunshaw, who lives in Fleetwood, records his “leaving home” time for a second meeting as taking place before the “arrival home” time from the first meeting."
The Conservative leader of Lancashire County Council, Cllr Geoff Driver has called on Cllr Grunshaw to resign.
Cllr Driver says:


“It doesn’t give a good impression of whether the police and crime commissioner can be trusted.

“The people of Lancashire are entitled to expect the utmost highest standards of honesty from their Police and Crime Commisioner and if he is shown to have been claiming for the same journey from the police authority and the county council he should resign as a Police and Crime Commissioner.”
Cllr Driver is right. Cllr Grunshaw should go.
Posted by Cllr Patrick Warner at 14:25