We are reigniting the Right to Buy revolution

There is no greater reward than a home of your own. People who've put everything in have every right to get something out. Aspiration is the bedrock of a free society.

No-one understood those values better than Margaret Thatcher. She once said: "To own your home is to do more for yourself and to do it the way you choose."

The Right to Buy revolution went on to secure more than a million people the keys to their first place. Many became the first generation in their family to become owner occupiers. They learnt that striving,
working hard, putting in the hours counted for something. They learnt ambition paid. And they didn't just pass their property onto their children but their aspiration.

Right to Buy helped create mixed communities, and gave people pride not just in their own home but also in their whole neighbourhood. And it allowed people to improve their home – such as installing a new front door – without having to get permission from some town hall official

Labour did their level best to erase Thatcher's legacy of happy homes. Stamping out the soul of enterprise, snuffing out the spark of ambition and scotching the spirit of enterprise.Labour made a succession of cuts to Right to Buy, successively reducing discounts and making it more difficult to claim .

As properties prices spiralled out of control, house building ground to halt - falling to the lowest peace-time level since 1924 - and the middle classes felt the squeeze. All those young families desperate to get on the ladder, all those strivers with their shoulders to the wheel, found the rug pulled from under them. A lost generation were doomed to a lifetime of worry, a lifetime of waiting.

But more than thirty years on from the first incarnation of Right to Buy, we're reigniting the Right to Buy revolution for the 21st century. It should never have been extinguished in the first place.Families will now get extra help of up to £75,000 to buy their own homes

More than four times the discount cap in London and three times it in most other parts of the country. And for the first time money from additional sales will be used to build more affordable housing.

We're giving people the keys to a happier future.

Paul Roberts from Swindon would agree. Paul had lived in his council house for 18 years. But he'd always kept his eye out for an opportunity to buy - more in hope than expectation.

And when he saw one of our advertisements he jumped at the chance to make his dream a reality. Finally, his long wait is over. Thanks to the new scheme, Paul has bought his first home.

He told us:
"It's a nice feeling to finally own this place after all the work I've put into it. It feels nice knowing I am secure and have no worries of losing my property. My partner and I have now got something we can pass onto our children which in this economic climate gives you a bit more of a sense of security."

With the door of opportunity opening, many more people like Paul are now starting to get a look in. Already around 75,000 people have got in touch to find out more.

This time around we're determined nothing will stop us. Least of all those cack-handed councils who want to keep people in the dark about their new rights. Because we're going over their heads. Writing out to potential home owners, in every corner of the kingdom From Norwich to Newcastle, Leicester to Lincoln, Manchester to Milton Keynes. Appealing direct to more than 600,000 householders.

We're telling them that this is their chance. Not just to guarantee the roof over their heads but to secure a stake in their future. After all, aspiration waits for no man. Margaret Thatcher once dreamt of a society "in which every family has the chance to buy their own home...to build up their savings...to pass something on to their children and their children's children."

Our revived Right to Buy is turning her dreams into a reality. 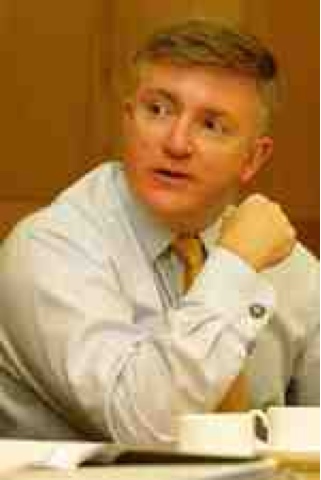 Posted by Cllr Patrick Warner at 02:20