A new mandatory life sentence for people who commit a second very serious sexual or violent offence has been introduced.
From today a range of new criminal offences and sentence will be introduced under the Legal Aid, Sentencing and Punishment of Offender Act (PASPO) 2012.

The Act introduces a mandatory life sentence for those convicted of a second very serious offence – a “two strikes” rule. For those criminals who do not come under the two strikes rule but have committed dangerous crimes, the Government is introducing an extended determinate sentence (EDS). Unlike a normal sentence, an EDS does not automatically end halfway through the jail term. Instead, these criminals will have to serve at least two-thirds of their sentence and may be detained until the end of it.

New offences have also been introduced including causing serious injury by dangerous driving and aggravated knife possession which targets those who wield a knife in a public place or school to threaten and create a risk of serious physical harm. 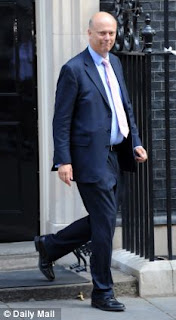 Justice Secretary Chris Grayling said of the changes, 'Criminals should be in no doubt they will be punished for their crimes, with those who commit the most serious offences receiving the most severe sentences.

'Anyone who commits two very serious sexual or violent offences will get a life sentence, those who try to destroy our communities by threatening and endangering people with knives will face a mandatory custodial sentence and those who devastate lives by dangerous driving will face the harshest penalties.'

Remaining provisions from the LASPO Act will come into effect in 2013 and Chris Grayling says he will make “more changes” as he continues to review sentences.
Posted by Cllr Patrick Warner at 02:19