Three people have been charged after protesters, including a man who climbed a telegraph pole, forced the closure of major Sussex road for several hours.

Police shut Crowhurst Road at Crowhurst for "public safety" reasons on Tuesday after a man scaled the pole.

A 19-year-old Cardiff man was later charged with wilfully obstructing the highway and resisting arrest.

A 26-year-old man from Sheffield and a man aged 22 from London were also charged with obstruction and assault.

All three are due to appear before Hastings Magistrates' Court on 22 January.

Supt Trevor Botting of Sussex Police said: "We had to shut the road from 1.20pm to 6.20pm for public safety.

"The contractors clearing trees and undergrowth for the new link road from Bexhill to Hastings were able to continue working but the person up the pole could have caused a hazard to traffic.

"I am aware the road closure was inconvenient for the local community and I want to thank them for their patience and tolerance. The work on the road continued uninterrupted."

Activists campaigning against the construction of the Bexhill to Hastings link road took to trees in Combe Haven Valley in December.

Demonstrators have also built a tunnel to prevent heavy machinery getting on to the site at Crowhurst.

The £93.8m link road, which has been under discussion for 20 years, finally received the go-ahead in March, when the government confirmed it would contribute £56m.

It will link the A259 and B2092, crossing Combe Haven Valley near a site of special scientific interest.

East Sussex County Council said environmental work, including archaeological surveys and creating new habitats for wildlife, began in July and the road was "crucial" to help regenerate the local economy.

Personally speaking, I can understand the frustrations of those living in the immediate area where construction will be taking place, no one likes change, especially when it is on your own doorstep but I believe the benefits that the new road will bring, not only to an area as poor as Hastings but also the wider East Sussex area are just to great to not build the road.

What I cannot stand however is the kind of imported professional protestors that we are seeing here and I am very pleased to see Sussex Police taking decisive action to remove them. I hope this sends a strong enough message to anyone else who is thinking about travelling to the area to protest - you are not welcome! 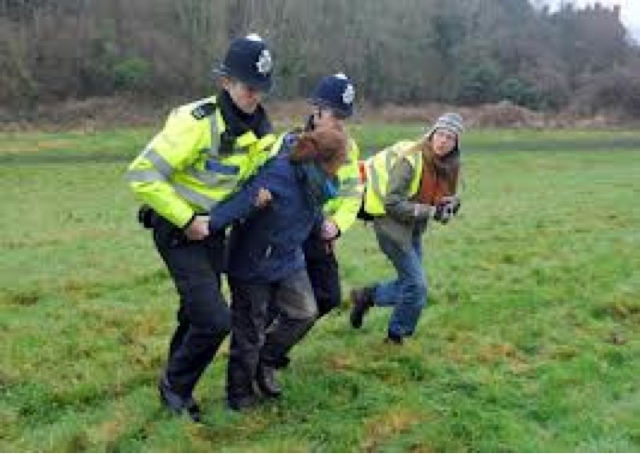 Posted by Cllr Patrick Warner at 06:09