By Robert Watts, Deputy Political Editor9:00PM GMT 12 Jan 2013
David Cameron is set to re-ignite a public feud with the Liberal Democrats over plans to cut the number of Westminster MPs.

The Prime Minister is to hold a vote in the Commons later this month in a bid to drive through constituency boundary changes that could cost Labour around 20 MPs and significantly increase the prospects of a Conservatives victory at the 2015 general election.

It had been thought that Downing Street would drop the proposed boundary changes after Nick Clegg vowed to block the reforms. Mr Clegg said his party would vote against the plan as revenge for the defeat of his House of Lords reforms by Tory backbenchers last summer.

The House of Lords will tomorrow vote on the proposals to cut the number of MPs from 650 to 600. However, even if the reforms are blocked in the Lords the Prime Minister will press ahead with boundary changes, because he is personally determined to press ahead with the policy.

The draft legislation returns to the Commons later this month and a vote amongst MPs is expected to be held within the next two weeks. If MPs vote in favour, Mr Cameron will seek to pass the reforms and use the Parliament Act to trump any opposition in the Lords.

A Number 10 source has told The Sunday Telegraph that Mr Cameron remains “absolutely committed” to boundary reforms and “would pull out all the stops” to get the legislation through.

“The Prime Minister is absolutely determined that MPs are given an opportunity to vote on boundary changes, even if the Lords vote against these changes on Monday,” the source said.

The parliamentary arithmetic suggests that Mr Cameron might just be able to “sneak” through boundary changes if all of his party and most of the minority parties vote in favour.

An alliance of Tories, the SNP and DUP members would number 317. There are 312 Labour and Lib Dem MPs.

Senior figures in the Government have even held discussions with senior figures in the Scottish National Party and Northern Ireland’s Democratic Unionists in a bid to get the minority parties to vote in favour of boundary changes. It is understood Mr Cameron will look more kindly on the SNP’s push for Scotland to gain a greater say in defence and foreign affairs matter if they back the proposed boundary changes.

Some Lib Dems may merely abstain from the vote and Mr Cameron might attract support from Plaid Cymru, the Welsh nationalists who have three MPs at Westminster.

The proposed boundary reforms has led to bitter words between the two Coalition parties. The Lib Dem MP Duncan Hames, a parliamentary aide to Mr Clegg, said that once Conservative backbenchers scuppered House of Lords reforms “it should have come as no surprise to Tory rebels that we would pull the plug on the boundary review. Let’s face it, they had it coming.”

Meanwhile, Tories accuse Lib Dems of “betrayal” for failing to back the changes.

Critics say that the Government’s commission into boundary changes has cost taxpayers at least £12million. However, Downing Street said that the proposed cut in the number of MPs would save the public purse £12million a year.

Although Mr Cameron and Mr Clegg last week pledged to work together in Government until the 2015 election, boundary reform is just one of a growing list of issues that divide the Tories and the Lib Dems.

Next week the Prime Minister is set to deliver a speech that will set out a new approach to the Government’s relationship with the EU. Lib Dems worry the address will be eurosceptic and outline plans for a referendum.

The two parties are also at loggerheads over energy policy, wealth taxes and plans to replace Britain’s aging fleet of nuclear submarines. 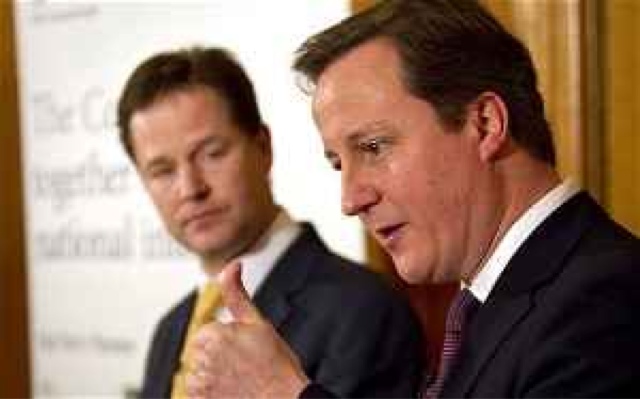 Posted by Cllr Patrick Warner at 14:34