East Sussex has seen a big increase in potholes following the recent severe weather that hit the county over Christmas and the New Year.
The heavy rain has contributed to road repair problems with over 500 potholes reported to the County Council since Christmas Eve.

However, Council road bosses say they are doing all they can to tackle the big potholes and programme in the less severe problems into their busy work schedule.

“Over the last two years, we've re-surfaced over 200km or 124 miles of roads in East Sussex, “said Councillor Carl Maynard, Lead Member for Transport & Environment. “That's equivalent to re-surfacing a road all the way from Lewes to Bristol.

“This year alone we've spent £19.5m on road re-surfacing. But even with this level of investment we will still get additional problems occurring when severe weather hits us.

“We're sending extra work gangs out to repair the most serious potholes as soon as they are reported. We have to prioritise our work – so the largest holes on the busiest routes will be at the top of our list.”

The Council is asking road users and pedestrians to help by reporting any potholes they find.
“We do inspect our roads but it's always a huge help to have the eyes and ears of the people who travel these routes every day,” said Councillor Maynard.

You can report a pothole or any other fault online: 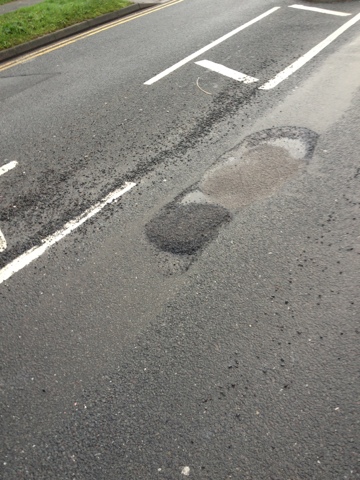 Posted by Cllr Patrick Warner at 02:02