On Wednesday evening at 6pm (thats tomorrow night or later today depending on when you are reading this) Councillors will meet at the Town Hall to vote on the Budget for the coming civic year. 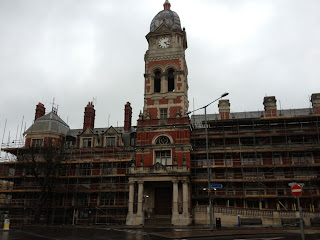 David Tutt's Lib-Dem administration has taken the comfortable option given the luck they have had with the finances during the last couple of years and is proposing to take advantage of the Government incentive to freeze Council Tax again this year - a noble act you may think, but couldn't he have been more ambitious? Eastbourne's Conservatives believe so and Opposition Spokesperson for Finance, Cllr Annabelle West will table an Opposition Amendment.

Conservatives believe that a more ambitious plan that combines a mixture of common sense, better use of assets and increased partnership working with our neighbours will enable real savings to be made that could deliver more for Eastbourne, her residents, visitors and the surrounding area.

Cllr West will outline proposals to save a whopping £500,000 per year by ending the Arms Length Management agreement that sees the council's housing stock managed by an external company at huge cost to the tax payer, a call to honour an agreement to reduce the senior officer count by one, increase partnership working with our neighbouring councils by working towards a sharing agreement that sees all Chief Officers shared by two or three councils, the better utilisation of our Town Hall and main offices at 1 Grove Road and a sharing of the proceeds from the Solarbourne project with all residents, not just a chosen few.

Eastbourne Homes was formed to enable the Council to benefit from a Government scheme that has seen an investment of £46 million to invest in improvements to council housing stock but this scheme is at an end now and is not being extended. Meanwhile, all tax payers (not just those who live in council housing) are funding seperate office accomodation costing £150,000 per year and an entirely seperate senior management team costing £350,000 per year. As there is still ample office space within the existing council portfolio of property and a senior management team within the council that is more than capable of carrying out the same functions of the existing seperate team, we believe that it should be brought back in house immediately.

Lib-Dems financial plans showed a reduction in the senior officer team of one this year and whilst lots of more junior officers that deal with the public are facing uncertain futures with further redundancies planned, no reductions have been made at the upper level. We believe that is wrong and furthermore we believe that the savings about to be made by councils across East Sussex working together on the new waste contract, should be learned from and taken further. Conservatives believe that if District and Borough Council's work closer in all areas, we could have just one senior officer team serving two or three authorities in the first instance. This would not only save considerable amounts of tax payer monies but could also lead to the benefits of a joined up approach in other areas, like tourism and economic regeneration.

Furthermore, when Lib-Dems took over the Town Hall in 2007, they took our office consolidation plans further, not only vacating offices at 68 Grove Road but they also cleared the Town Hall building and moved everyone into the refurbished 1 Grove Road behind the Central Library. We were told that the ageing Town Hall was too old and could not get workable improvements for technology and would be too expensive to upgrade to meet modern disability access requirements.

Imagine our surprise to find in recent months then that the empty building has now been equipped with wireless networks in every room at a cost of nearly £8,500 and that over £20,000 has been spent on consultants to explore future uses for the building. There are now three very vague options for turning the building into a Community Hub and inviting charities to come out of their communities they serve and in to the Town Hall. These vague options will add insult to injury for businesses in Little Chelsea as not only did Lib-Dem Councillors recently give the green light to Tesco to open yet another store in the bottom of the old council offices at 68 Grove Road which will hurt independent convenience stores in the area but they also talk about options for a cafe in the Town Hall which could put further independent cafes and coffee shops out of business in Grove Road. And after blowing nearly £30,000 it has been revealed that they may have to spend hundreds of thousands of pounds improving disability access in the Town Hall without ever guaranteeing an income from the building which will cover its running costs.

Conservative proposals would see the Town Hall returned to use as a Civic building (exactly what it was designed for), non-customer facing officers and departments moved back in and up to two whole floors of 1 Grove Road let out at far more beneficial commercial rates which would provide further income in future years that can be given back to residents and expand the number of services available from a true 'one stop shop'.

This more sensible approach would make it possible to share the proceeds with all residents by providing a 2% cut in Council Tax which would continue to fund itself in future years whilst aiming to cut further in future years as the benefits of the proposed changes filter through.

We would also look to restore the post of Dog Warden which Lib-Dems did away with during recent re-organisation and add additional resource to maintain and improve our Parks & Gardens, that are so valued by residents and visitors alike. Further investment would also be made to offer more affordable housing which we would like to see tied to employment and training opportunities, this could help train people to do jobs in the area that we currently struggle to find skilled staff for, putting a focus on 'a hand up, rather than a hand out' and providing life changing opportunies for local people.

Posted by Cllr Patrick Warner at 06:17