English should be the language of Europe, claims Germany's president as he begs Britain not to leave the European Union

English should become the language of Europe, the German president has claimed.
Joachim Gauck made his comments in Berlin as he pleaded with Britain not to leave the European Union.

In remarks unlikely to please the French, Mr Gauck said English had become the ‘lingua franca’ of the continent.

‘One of the main problems we have in building a more integrated European community is the inadequate communication within Europe,’ he said.

‘It is true to say that young people are growing up with English as the lingua franca.
‘However, I feel that we should not simply let things take their course when it comes to linguistic integration.

‘More Europe means multilingualism. I am convinced that feeling at home in one’s native language and its magic and being able to speak enough English to get by in all situations and at all ages can exist alongside each other in Europe.’

Mr Gauck also pleaded with Britain to stay in the EU.

Referring to David Cameron’s pledge of an in/out refernedum on the EU Gauck said in a keynote speech: 'Dear English, Scots, Welsh, Northern Irish and new British citizens. We would like to keep you!

'We need your experiences as the country with the oldest parliamentary democracy, we need your traditions, your soberness and your courage.

'You helped with your deployment in World War II to save our Europe - it is also your Europe.
‘More Europe should not mean "without you," he said to thunderous applause at his palace in Berlin in his first major address since taking on the job nearly a year ago.

Aware that a powerful Germany is now seen as a bully in many European countries - dictating austerity in cash-strapped nations - he insisted in his televised speech: 'We don’t want to browbeat others, or press our concepts on them. We stand however by our experiences and would like to convey them,' recalling that less than a decade earlier Germany had been the 'sick man of Europe.'

The president, whose has a largely ceremonial and moral leadership role, conceded that a 'structural flaw' led to an imbalance in the European Union which was only 'patched up by emergency measures, such as the European Stability Mechanism and the fiscal compact.'

He also condeded that most of what the EU’s 500 million citizens have read or heard about the 27-member bloc over the past few years has tended to be about the eurozone crisis. “This is also a crisis of confidence in Europe as a political project. This is not just a struggle for our currency; we are struggling with an internal quandary too.”

The president then went on to remind his audience, which was largely made up of people under the age of 30, of the achievements of the EU since it began as a trading block in the post-war years - including the fact that the bloc 'has been at peace ever since.'

After all, he said, 'it was from our country that the attempts to destroy everything European, all universal values were unleashed.

Despite everything that happened, the Allies granted our country support and solidarity straight after the war,' he said. 'We were invited, received and welcomed.'

The president also stressed that despite its economic might, Berlin had no aspirations of imposing 'a German diktat.'

Gauck, an activist pastor from former communist East Germany, defined what Germany owed to Europe and the western Allies in rebuilding after the devastation of WWII. 'We were spared at the time what could have easily followed after our hubris, an existence as an outcast stranger outside of the community of nations.' 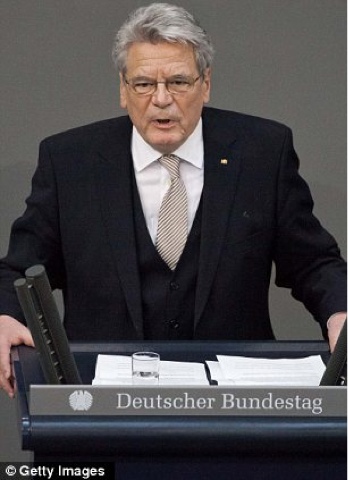 Posted by Cllr Patrick Warner at 15:33