Classic Cars to get a new TV show

A new classic car show is about to hit TV screens in the UK. It will show the restoration of neglected classics, charting their return to former glory. It’s called Car SOS, and is exclusive to National Geographic Channel.

Presenter Tim Shaw, (above left familiar from Fifth Gear) teams up with mechanic/musician Fuzz Townshend, (above right, The Wonder Stuff, The Beat and Pop Will Eat Itself, Practical Classics). Together they retrieve, renovate and re-unite charismatic cars with their owners in an entertaining and emotional new TV show.

The formula is to find a cherished car that has seen better days, add an owner in need a of a helping hand, then secretly whisk the wheels away to a well-equipped workshop, work on it for 3 weeks, then return to the surprise and delight of the unsuspecting owner.

When his wife’s tragic death was followed by a near-fatal car accident, which broke his back, former mechanic Jeremy, from Dunstable, was left in great emotional and physical pain – and unable to restore his rare sky-blue FIAT 850 Spider (above). Nominated by his girlfriend Debs, Fuzz and Tim are called in to end Jeremy’s run of bad luck and give his pride and joy the makeover it deserves. It should be fairly straightforward but spares are rare and hard to find.

After surviving active service in the Second World War, 84-year-old Dick Masters’ beloved Ford MB Army Jeep has been on permanent sick leave since it was all but destroyed in an arson attack six years ago. Dick loved his Jeep so much that during the fire he tried to save his Jeep instead of his house and had to be physically restrained by firemen. Claiming they need it for a film prop, Fuzz and Tim retrieve the Jeep from under Dick’s nose and embark on a rapid-fire renovation. 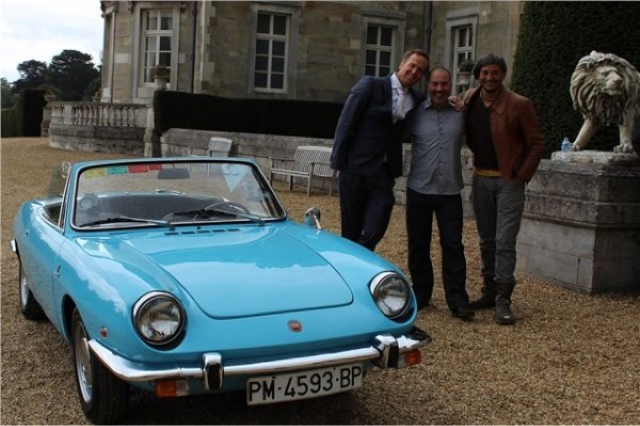 Posted by Cllr Patrick Warner at 00:10