The Aegon International is set to feature some of the world’s top players once again this summer – and tennis lovers can get up close and personal as tickets go on sale this weekend.


The tournament, hosted on the pristine lawns of Devonshire Park in Eastbourne, takes place between 15-22 June as the great and the good fine tune their preparations for The Championships, Wimbledon.


Former US Open Champion and three-time Wimbledon finalist Andy Roddick took the 2012 men’s title before retiring at the end of the season while Austrian Tamira Paszek kick started her grass court season last year by lifting the women’s title, defeating Germany’s Angelique Kerber in the final.


Daily tickets for the Aegon International go on sale at 9am this Saturday February 16 at www.aegoninternational.co.uk/tickets or by calling 0844 581 3015.


“Some of the world’s top male and female players play here every year and the standard of tennis on show is always very high.


“There is plenty on offer for all the family at Devonshire Park and it’s a fantastic chance to watch some top class sport.”


With the success of the Family Day in 2012, entry will once again be free to all spectators on Saturday 15 June with tickets available on a first come, first served basis on the day.


And there is a special Father’s Day treat on Sunday 16 June as some of the game’s former stars compete in a Legends game on Centre Court. Keep checking the tournament website for more information.


Tickets for the Legends match are £18 for adults and £5 for juniors – these will apply to Centre Court seats but will also give access to Court 1 and the grounds. 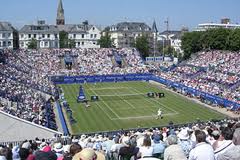 Posted by Cllr Patrick Warner at 05:19