David Cameron’s trip to India – and two examples of change

By Peter Hoskin via conservativehome 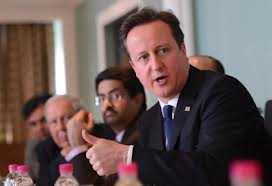 So far, David Cameron’s trip to India has represented one quality above all others– change. And that change has come in two forms, which are:

1) Trade. Of course, it’s not a new Coalition policy to seek out trade with countries that are several time zones away: David Cameron visited India with exactly that purpose back in 2010. But that policy is still part of a grander shift. The Government wants to move Britain away from its traditional reliance on European and North American markets, and take advantage of fast-developing economies such as Brazil, China and India, where a growing middle class is—in theory—creating demand for British expertise and innovation in finance, luxury goods, engineering and so on. The thinking is simple: why hitch up to, say, the Eurozone when there’s gold to be struck elsewhere?

But, as the BBC’s James Landale points out, there is a difference between Mr Cameron’s previous visit to India and this one. This time, the trade delegation accompanying him doesn’t just contain representatives from British multinationals such as Barclays and BAE, but also from some small- and medium-sized enterprises. This, no doubt, is an attempt to extend the benefits of soft diplomacy to those who don’t normally receive them.


It’s all a slow process, however: in the year to last November, for instance, UK exports to Germany were worth £31 billion, whereas those to India only totted up to £4 billion. But there has been some progress. Last year, according to the Centre for Economics and Business Research, exports to non-EU countries surpassed those to EU countries for the first properly sustained time since the 1970s. The same organisation also predicts export growth, over five years, of 30 per cent to Asia, over 40 per cent to Latin America and over 60 per cent to Africa, albeit from a low base.
2) Immigration. The Prime Minister today said that he’s planning to make it easier for Indian businesspeople to visit Britain – and he encouraged Indian students to apply for visas, too. This is as much a shift in rhetoric as it is in policy, but either way—as I suggested yesterday—it’s entirely sensible. The question now is whether Mr Cameron will loosen the red tape wrapped around those businesspeople and students migrating from countries other than India. This would certainly help Britain’s economy, even if it erodes the hard-edged purity of the Tories’ overall message on immigration. And it would be another change, one really worth talking about.
Posted by Cllr Patrick Warner at 05:25