The UK economy has "cause for optimism", the governor of the Bank of England has said. 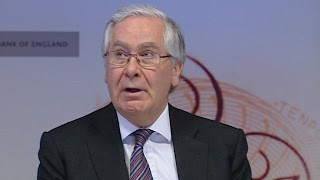 Sir Mervyn King, presenting the Bank's latest quarterly inflation report, 20 years after it issued its first one, said "a recovery is in sight".

But he said the outlook for inflation had worsened since November.

He now expects the inflation rate, currently 2.7%, to rise to at least 3% by the summer and to remain above the Bank's 2% target for two years.

The Bank's last report in November said that inflation would fall back towards its 2% target in the second half of this year.

Sir Mervyn said that factors outside of the Bank's control - increases in university tuition fees and utility bills - had added to inflation recently.

"If you like, it is a bit of a self-inflicted goal in terms of the damage done to real take-home pay, perhaps another way of trying to implement fiscal consolidation through moving up the price level," he said.

"This is not the result of easy monetary policy and nor does it reflect what's going on in the economy."

He drew parallels between now and when the Bank's first inflation report was presented in 1993.

"[In February 1993] unemployment had just reached its peak. Although we didn't know it at the time a recovery was on its way.

"[Today] there is cause for optimism. Today too a recovery is in sight."
'Encouraging' picture
The economy shrank by 0.3% in the last three months of 2012, fuelling fears that the UK could re-enter recession, defined as two consecutive quarters of contraction.

Although economic output has been broadly flat for the past two years, Sir Mervyn said that masked "a more encouraging underlying picture".

Manufacturing and services - which make up the bulk of the economy - had grown during 2012, seeing a similar performance to that in the US and considerably stronger than in Japan and the eurozone, he said.

The weakness in overall output reflected falls in construction, which is "unlikely to be repeated in 2013".

"Growth is likely to be weak in the near term but further out a continued easing in domestic credit conditions, supported by the Bank's asset purchase programme and the Funding for Lending Scheme, together with the stronger global backdrop, underpin a slow but steady recovery in output," the governor said.

Sir Mervyn was delivering his penultimate inflation report. His last report will be in May, before he is replaced by Mark Carney as governor in the summer.
Posted by Cllr Patrick Warner at 05:18