The British Prime Minister, David Cameron, says he will not accept an EU budget deal unless further cuts are made in negotiations in Brussels. 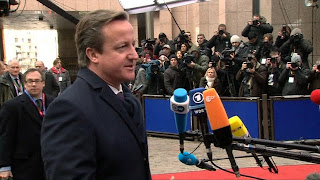 European Union leaders are gathering for a two-day summit to try to strike a seven-year spending deal, after a previous meeting in November failed.

But Mr Cameron said the figures being proposed "need to come down. And if they don't... there won't be a deal".

The European Commission head called for "a spirit of responsibility" in talks.

Jose Manuel Barroso said: "Further delays will send out a very negative message at this time of fragile economic recovery. The risk is that positions will harden and will be even more difficult to overcome."

The formal meeting has been delayed, apparently to allow more time for discussions on a compromise.

High EU expenditure at a time of cutbacks and austerity across the continent is the main issue dividing the 27 member states.

But with other EU spending commitments included, that would still give an overall budget of 1.011tn euros.

The UK, Germany and other northern European nations want to lower EU spending to mirror the cuts being made by national governments across the Continent.

An EU source told BBC News any extra cut would probably be made to growth-related spending in areas such as energy, transport, the digital economy and research.


The biggest spending areas - agriculture and regional development - are largely ring-fenced because of strong national interests, the source said, speaking on condition of anonymity.

The BBC's Europe editor Gavin Hewitt notes that whatever is agreed has still to go to the European Parliament, and MEPs are big backers of EU spending.
Compromises
Scheduled to begin at 14:00 GMT on Thursday, the summit has been put back to 16:30. "We needed more time to work on the compromise proposal," an unnamed EU official told AFP news agency.

A grouping led by France and Italy wants to maintain spending but target it more at investment likely to create jobs.

French President Francois Hollande told reporters on Sunday that conditions were "not yet in place" for a deal but also signalled that Paris was prepared to make compromises.

He and German Chancellor Angela Merkel held talks in Paris on Wednesday before attending a France-Germany football match.


Mrs Merkel's spokesman said she and President Hollande had had "a short but intense meeting... to see what kind of agreement could be made".

Mrs Merkel - seen as the powerbroker in the summit - has already acknowledged that the talks will be "very difficult".

In Brussels, a European Parliament spokesman warned that more severe cuts would leave the commission unable to do its job as the EU integrated more deeply in response to the financial crisis.

"How can we imagine that an EU institution can ensure a proper banking union with a budget that is cut by whatever billions in figures we hear, here and there?" said spokesman Olivier Bailly.

"At the moment, there is a need for a reality check between the requests that are sent to the Commission, the Council, the Parliament, or the European Central Bank, and the budget - the means - that are given to these institutions to fulfil their commitments."

The split in the EU reflects the gap between richer European countries and those that rely most on EU funding.

The argument for higher spending is supported by many countries that are net beneficiaries, including Poland, Hungary and Spain.

Others, mostly the big net contributors, argue it is unacceptable at a time of austerity.

Germany, the UK, France and Italy are the biggest net contributors to the budget, which amounts to about 1% of the EU's overall GDP.

Analysts say failure to reach an agreement on its seven-year budget would mean the EU falling back on more expensive annual budgets.
Posted by Cllr Patrick Warner at 08:05