Britain's war wounded are to be given the latest "bionic" legs in a £6.5 million deal. 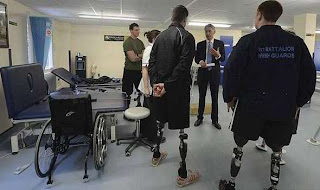 They will get the most advanced prosthetics - or artificial limbs - through the new funding announced yesterday by Defence Secretary Philip Hammond and Chancellor George Osborne.

The prosthetics include the Genium ‘bionic’ leg made famous by former soldier Derek Derenalagi at last year's London Paralympic Games.

He competed in the discus for Great Britain despite losing both legs to a Taliban bomb blast and being at one point left for dead.

The Genium is the world's only microprocessor-controlled and anticipates its owner's movements to help them walk as naturally as possible.

The MoD says that it expects 160 personnel wounded in Iraq and Afghanistan to benefit from the bionic knees.

The Genium uses the technologies in the Wii gaming systems to sense and react to user movements.

This means its users can side-step, walk backwards, shuffle, pivot on their prosthetic leg and perform a wide range of common movements naturally without concentrating.

Its makers say that unlike other artificial legs it lets amputees walk over obstacles instead of around them.

The move was welcomed by veterans' charity Help for Heroes founder Bryn Parry who said: "World class prosthetic care for our wounded is something that we have been campaigning for since Help for Heroes launched.

"Our wounded Servicemen, women and veteran deserve the best. This announcement will help transform lives. We must remember that there is no one-size-fits-all solution and that each individual must be given the best prosthetic for them."

The MoD said the knew prosthetic will be available to any personnel where clinical conditions indicate it would be appropriate.

Surgeon General Air Marshal Paul Evans said: “The next generation of micro processor knee is a fantastic prosthetic development and now seen to have proven benefits for certain amputees.

"It will improve the quality of life and rehabilitation for our patients, where it is clinically suitable.

"Not only does it provide better stability and improved mobility but will also help reduce back pain and aid rehabilitation generally. The team at Defence Medical Rehabilitation Centre are now planning for individual patients to be offered the next generation of micro processor knee where clinically appropriate.”

Mr Hammond said: "Last year we spent £22 million improving the facilities at Headley Court and I am delighted to announce that we will now spend £6.5 million to ensure UK Servicemen and veterans injured in Afghanistan or Iraq will have the opportunity to upgrade to the most technologically advanced prosthetics currently available.”

Mr Osborne said: "Our troops are heroes who have and continue to give absolutely everything for their country and it is only right that we do everything possible to help them, especially when they suffer injury. I am delighted therefore that we have been able to make funding available for this cutting edge prosthetic technology, which will go a long way to improving the lives of people who have done so much for the UK.”