European leaders back the Government’s decision to offer the British public an in-out referendum on membership of the EU, William Hague has said. 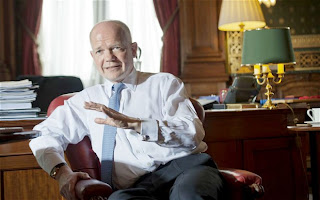 Mr Hague, the Foreign Secretary, said there has not been a “wall of hostility” from European Union leaders since David Cameron announced the referendum earlier this month.


He made the comments ahead of a European summit on the EU's trillion-euro budget this week, at which the Prime Minister is expected to clash with Francois Hollande, the French president.


Giving evidence to the Foreign Affairs Select Committee Mr Hague said that Angela Merkel, the German chancellor, has a “passionate belief” that Britain should remain in the EU.


“Governments have reacted in a wide range of ways,” Mr Hague said. “Chancellor Merkel has reacted in a pragmatic way and that is true of many other European capitals.”


He added: “The French government, which very clearly has many different views about the future development of Europe, has said very clearly they want to keep the United Kingdom in. The idea that there is some wall of hostility to the ideas we have put forward I think would be a mistake.”


Mr Hague denied that the referendum pledge had lessened Britain's influence in the EU.
“I want to make the case that it can enhance our influence,” Mr Hague said. “The scope is there for Britain to lead with ideas.”

Mr Hague rejected the suggestion by Tory committee member Sir John Stanley that it would lead to "inescapable business blight".

“You can argue that any democratic uncertainty disturbs businesses… we cannot think that allowing democracy to happen is an unacceptable risk.”

Mr Hague also denied that the decision to hold a referendum had been in any way motivated by the Conservative Party’s recent performances in the polls.

He said it could prove a "particularly memorable" term if Britain votes on whether to stay in the European Union while it holds the EU presidency.

The Prime Minister has set a deadline of November 2017 for an in-out referendum should the Conservatives win the next general election.

Britain is in line for a turn in the rotating presidency in the second half of that year and the Foreign Secretary said he could not rule out the two coinciding.

"It will depend on the timing on the negotiations," he said. "I would not exclude it being held during it; that would make for a particularly memorable presidency."