The future of the Red Arrows is safe as long as David Cameron is prime minister, Number 10 has said. 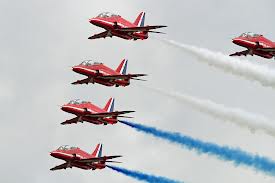 The guarantee over the RAF display team, which costs about £9m a year, emerged during the PM's trip to India.

It came after RAF expertise was offered to the Indian military to enable its Surya Kiran display team to conduct similar colourful flypasts.

There has been speculation in the media that the Red Arrows could be axed as part of defence cuts in the UK.

Meanwhile, the Indian government has signalled an interest in buying a third tranche of British-built Hawk planes for its display team.

Mr Cameron has also become the first serving prime minister to pay his respects at the scene of one of the bloodiest massacres in British history.

He is visiting Amritsar in the state of Punjab, where hundreds of demonstrators were shot dead by British Empire troops in 1919.
Smoke pods
Mr Cameron wants to improve defence ties between the UK and India.

But talks on Tuesday with his Indian counterpart Manmohan Singh were overshadowed by Mr Singh's concerns about allegations of corruption over a £480m deal with the firm AgustaWestland.

Despite the setback, the Indian government is said to be interested in a fresh order of Hawk aircraft to be used by its military aerobatics team, the Surya Kiran.

Mr Cameron has offered the RAF's help to fit the Hawks with smoke pods so the colours of the Indian flag can be trailed behind.
National events
Recent newspaper reports appeared to cast doubt over the future of the Red Arrows.

A Downing Street source confirmed that as long as Mr Cameron remained in Number 10 the Red Arrows would continue to grace Britain's skies.

The Red Arrows are often seen at major national events in the UK and were prominent at celebrations last year for the Queen's Diamond Jubilee and the London Olympics.

The team is based at RAF Scampton in Lincolnshire, although has been temporarily relocated to RAF Cranwell, also in Lincolnshire, while maintenance work takes place on the runway at Scampton.

The Red Arrows were formed in 1965 at RAF Fairford in Glouces­tershire - their formal title remains the Royal Air Force Aerobatic Team.
Posted by Cllr Patrick Warner at 05:28