Nick Clegg jumped on the celebratory band wagon today as he attempted to lay claim to the Prime Minister's victory in Europe on the budget cuts. 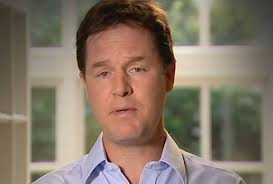 The Deputy PM, who had previously claimed there was no prospect of any real-terms cuts, heralded his own role in securing a deal in Europe.

He highlighted his part in building alliances with other EU nations to suport a reduction.
Last week, David Cameron struck a deal with the leaders of the 27 nations on a spending cap for the budget over the next seven years.

The Prime Minister succeeded in persuading Europe's most powerful countries to cut spending by £30billion, saving the UK taxpayer £300million a year - a feat which Mr Clegg said would not be possible.

Tory Andrea Leadsom probed Mr Clegg on his previous stance on the EU, questioning whether he regretted his comments ahead of the cuts.
She asked: "Do you now believe the Prime Minister is on a bit of a roll and may also be successful in achieving the real repatriation and renegotiation of powers in the EU that will give Britain a better deal?"

Mr Clegg replied: "The lesson of the highly successful summit last week is that it is important to set out a tough but realisable negotiating position.

"And then as we did across the coalition, I spent months making the case for the tough approach that we took with politicians around the union, reaching out to create alliances with other countries - the Dutch, the Swedes, the Danes and crucially the Germans - and then winning the argument.

"If you want to reform Europe you have to get stuck in and win the argument, not simply withdraw to the margins and hope that the argument will be won by default."
Posted by Cllr Patrick Warner at 08:17