Labour shows its true colours with this spiteful tax on homes

If the two Eds get their way, an Englishman’s home will not be a castle, but a leaky ruin 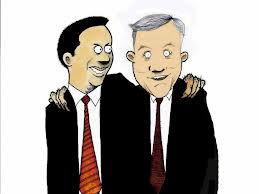 Whoa there, I hope you haven’t just spent a happy weekend of pottering about and improving your home, in the way of British families for hundreds of years. Forget about the conservatory, folks. Stuff the new kitchen. You want my advice, you will let it all slide.


If you see one of those damp patches appear on the ceiling – about the size and colour of a poppadom – you should just lie back and watch it grow. If the floorboards yawn open, just cover the gap with cardboard. Never mind the state of the downstairs lavatory. A faint aroma of ammonia never hurt anyone. Drip from the ceiling? Shove a bucket under it.


I tell you why I offer these household tips: they are the only sensible response to the first policy Ed Miliband has offered the British people. Under a Labour government, it is now clear, you would run a risk in making any improvements whatever to your home – because any such effort might lift you over the limit for Ed’s so-called “mansion tax”.


At which point the state would fine you viciously for any increment in value over a certain threshold. It is always a relief when your opponent stops ducking and weaving, and announces what he actually believes in.


At last we can see exactly what kind of a Labour leader Ed Miliband proposes to be – and he is taking his party right back to the politics of envy and nihilistic class war that kept them out of office for a generation. The proposal for a new tax on people’s homes is ill-thought-out, unjust and un-British. It is colossally unfair on Londoners, since the vast majority of homes that would currently qualify are in the capital; but then there are plenty of other properties dotted around the country – family farms, for instance – where the notional cash value of the buildings would incur a mansion tax far beyond the ability of the family to pay.
Posted by Cllr Patrick Warner at 05:57