The Coalition’s junior partner started well, but is now a threat to good government 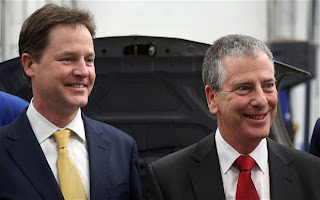 Above: Nick Clegg, the Lib Dem leader, with Mike Thornton, the party's candidate in the forthcoming Eastleigh by-election Photo: GETTY

One of the most important, though least recognised, functions of the modern Liberal Democrat party has been as a home for eccentrics and the harmless lunatic fringe. The importance of this should not be understated. The British have always tolerated, and sometimes celebrated, feckless and irresponsible men and women – and they need a home in public life.


For obvious reasons, however, it is best such people are kept out of government. Hence the charm of the Lib Dems. For more than half a century they have provided a secure base on the sidelines from which all manner of ammunition can be hurled at the ruling party, though with no genuine prospect of gaining power.


This socially hugely valuable contribution ceased with the formation of the Coalition in May 2010, when the Lib Dems were obliged to adapt to being a party of government (much of the recent rise of Ukip can be accounted for by the fact that it has taken over as the party of protest).


At first the Lib Dems did far better in office than anyone expected. Their MPs and activists admirably recognised that great sacrifices were needed to cope with the economic crisis. With considerable composure and restraint the party even supported tuition fees, a measure that it had opposed in its own manifesto.


As a result, Britain has been much better governed than critics acknowledge over the past two-and-a-half years. A great deal of this has been down to the rectitude and admirable self-control of the Lib Dems.


Sadly, this is changing. Since the middle of last year, the party’s discipline has started to weaken, collapse and relapse to the status quo ante. The mass of evidence is now impossible to ignore, and must be confronted if the Coalition is to survive, as it is scheduled to do, for a further two years.

Let’s first of all examine the extraordinary conduct of the Lib Dem Coalition members over the Justice and Security Bill, which allows secret court hearings for terror suspects and is (if the Government is to be believed) essential to the fight against terrorism. The Bill has not yet become law, and so far the Coalition’s junior party has adopted more positions than can be found in the Kama Sutra.

The first was advocated by Lord Wallace of Tankerness, the irreproachable front-bench peer who introduced the Bill to Parliament. Expressing his support, he declared that the measure was “sensible, proportionate and targeted at a genuine and serious problem”.

Lib Dem activists did not agree. Egged on by civil rights groups, they proposed and won a vote at last year’s party conference to throw out secret court hearings, on the basis that they represented “a fundamental challenge to the balance between the Government and citizens in the justice system”.
As a result, the Lib Dems found themselves simultaneously advocating principled support for the Bill and ferocious opposition. Not surprisingly, there followed a chaotic period in the House of Lords during which the party’s peers joined with Labour to inflict a series of defeats on the Government.

The confusion continued when the Security and Justice Bill returned to the Commons. At different times the Lib Dems have supported secret courts, opposed them, and offered various other compromise solutions. We are still no nearer a final answer, and last week matters grew muddier still when Nick Clegg promised yet again to reconsider his party’s position.

This is all reasonably entertaining, and in any case would not matter a damn if these people occupied their usual spot on the opposition benches. But as they are in government, it is very troubling indeed. Almost exactly the same problem is emerging over Coalition plans, announced just before Christmas, to freeze welfare benefits. Already the Lib Dems (led by former leader Charles Kennedy in the Commons) are in full-scale revolt against Coalition policy. Proposals to cut legal aid have given rise to similar paralysis and confusion among Lib Dem MPs.

The conduct of some of them has become farcical. Sarah Teather, who supported a freeze to working tax credits in various Budgets from June 2010 onwards, is now opposed to the Welfare Benefits Uprating Bill, which caps increases to welfare payments. Ms Teather suffers from a specifically Lib Dem problem: she appears to believe that she can simultaneously support and oppose the Government. A Lib Dem leaflet in her Brent Central constituency last year exclaimed: “Who can you trust to stop the cuts? Not Labour!”

This was how matters stood before the resignation of Chris Huhne and the subsequent Eastleigh by-election. This event appears to have induced some kind of nervous breakdown in the party. Let’s examine the sad case of its leader, Nick Clegg, who visited the constituency on Monday.

For the past two years, Mr Clegg has joined forces with David Cameron to force through the biggest relaxation of planning laws in living memory, thus giving a boost to the Coalition’s agenda for growth. Indeed, it is only four weeks since the Deputy Prime Minister was quoted in The Daily Telegraph calling for new settlements modelled on the New Town of Milton Keynes to be built across the home counties. Mr Clegg declared that there was an “arc” of land between the West Country and Cambridge where there “aren’t enough homes to live”.

Could this be the same Mr Clegg who announced at Eastleigh on Monday that the Lib Dems were leading the fight for “green spaces” against Conservative development plans? It certainly could!
Here’s another example of a volte-face from the Deputy PM. Last year he warned Conservatives pressing for an EU budget cut that they had “absolutely no hope”. Yet last week he had the audacity to claim that he had spent “months making the case for the tough approach” adopted by Mr Cameron in Brussels. Even by the historically shameless standards of the Liberal Democrats, this was very shameless indeed.

One needs a heart of stone not to empathise with the Lib Dem problem. For almost half a century, the party has become accustomed to launching opportunistic assaults on government. During this period it has never troubled itself with consistency and coherence, allowing it to seize on local grievances with great skill and ferocious passion. This is the only language it knows, and it is starting to pose a real threat to sound government.

The Cameron/Clegg Coalition has done many good things, and I believe will be much praised by historians. But unless the Lib Dems can pull themselves together, it may be time to consider the words of one of the most under-rated Conservative prime ministers, Sir Alec Douglas-Home, when pondering on the National Government of the Thirties: “Coalitions, however promising their start, have no stamina, and should not be prolonged beyond the duration of the crisis which they are designed to meet.”
Posted by Cllr Patrick Warner at 04:59