Twenty cities in England will be freed from the Whitehall leash and given more autonomy to shape their economic growth under new government plans.
Last summer, eight of England's largest cities confirmed deals with the Government to boost local growth.

Having submitted strong plans to unlock growth potential in their area, these cities have been given more freedom to shape their futures, including autonomy over how to spend their training and skills budgets and the freedom to develop local investment funds, build roads and unlock developments.

Due to strong demand from other cities to be part of the initiative, in October last year, twenty additional cities were invited to submit bids for a City Deal. Following careful assessment of the bids, the Government has given all twenty cities the green light to progress.

The Government will now work closely with these cities to develop their proposals into a final deal with the aim of all deals being completed over the next year.

The twenty cities whose bids have been successful are located throughout England and cover areas which account for 41% of England's population and 39% of the jobs market. The proposals put forward by the cities cover a wide range of industries.

Brighton & Hove want to use the City Deal to realise the economic potential of their eco-tech sector whilst Sunderland and the North East plan to expand their manufacturing base. The Oxford area aims to catalyse existing expertise based at their world-class universities and 'Big Science' research centres to accelerate local growth in the knowledge economy, specifically bio-sciences and space technology, and Plymouth plan to strengthen their advanced engineering and marine renewable energy industries. 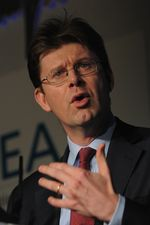 Financial Secretary to the Treasury and Minister for Cities, Greg Clark said of the announcement to progress City Deals for an additional twenty cities: "Each city is unique and yet for decades Whitehall has treated them as being the same - there has been too little sense of place in government policy. City deals are a quiet revolution in the way Britain is governed. Rather than London laying down the law, cities have the right to do things their way."
Posted by Cllr Patrick Warner at 09:35