Lord Ashcroft, a driving force behind the new Bomber Command Memorial, uncovers the poignant story behind a note left there. 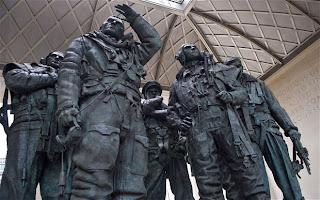 They were just 17 words dispatched with four kisses but, once I had read them, I could not get them out of my mind: “In loving memory of Monte Shute. Beloved husband of Grace Ethel Parsons, now 91 and still remembering xxxx.”


I had found the handwritten message on a card at the new Bomber Command Memorial in central London during a visit in August.


That night I looked at the note – which I had photographed – again and again, continually repeating five of the words under my breath: “Now 91 and still remembering.”


The indications were that Monte Shute had been a member of Bomber Command and had died during the Second World War. And here was his widow still mourning his death nearly 70 years on. What truly wonderful people they must have been – one to have deserved such devotion, the other to have given it.


I had been at the unveiling of the Bomber Command Memorial by the Queen on June 28. In fact, I had been partly responsible for the memorial being built: disappointed and angry that the bravery of the men of Bomber Command had never been properly recognised, I donated more than £1 million to the campaign for a monument in Green Park.

But who, exactly, was Monte Shute? And who is Grace Ethel Parsons? I had mixed feelings: I did not want to intrude on private grief but I was intrigued to know more about them.

After weeks of inquiries, including a nationwide television appeal, a new lead enabled me to trace and meet Grace. Just weeks short of her 92nd birthday, she is 5ft 4in tall with near-white hair. But she still has a sharp sense of humour and a twinkle in her eye. 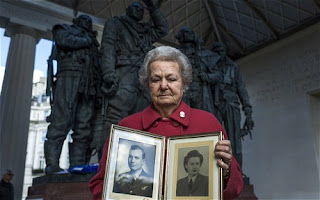 Born in 1920, in Reading, Berkshire, she was the second youngest of five children. Her father was a steel industry manager and her mother had been a housewife.

When the Second World War broke out, Grace was working in the accounts department of a biscuit factory in Reading. She volunteered for the Women’s Auxiliary Air Force (WAAF) because she wanted to serve her country in its hour of need.

In early 1943, while Grace was based at RAF Upwood in Cambridgeshire, she met the man who would become the great love of her life.

After completing an operational tour in Blenheim bombers from Malta, the heavily targeted island whose inhabitants were later to be awarded a collective George Cross, Flight Sergeant Montague Shute had been posted to RAF Upwood for a rest.

Handsome in his RAF uniform and 27 years old, Monte, a navigator, had met Grace in the sergeants’ mess at the RAF base. Asked if it had been love at first sight, Grace laughed and said: “There was certainly an immediate mutual attraction.” In fact, Grace was engaged to another man at the time but she ended that relationship when her feelings for Monte grew.

“It didn’t take us long to fall in love. Of course, we knew that Monte would probably be sent back on another tour and that, of course, is exactly what happened.”

Grace remembers his positive approach to life. “Monte had a carefree attitude: he was always smiling and enjoying himself.

“Like most of the aircrew, they put on an act that nothing ever bothered them when, in fact, they must have been worried about the dangers of their next tour. Aircrew were always different to everyone else.”

After a three-month romance, the couple married in Morden, south-west London, on June 26, 1943. “It was a lovely day – a small wedding,” she says. “My parents were there – my father

gave me away – and Monte’s parents were also there. We were very much in love.”

The newlyweds enjoyed a weekend honeymoon at the Lygon Arms in Broadway in the heart of the Cotswolds. Under a wartime scheme, their break was paid for by the RAF.

They then had a few precious weeks of married life in a guesthouse in a village outside RAF Upwood.

“We both had bicycles and we used to cycle into camp together,” says Grace. “But, like so many other couples at the time, our happiness did not last long – just three months – and then the powers that be decided to send my husband on a second tour of 'ops’. After many weeks spent converting to Lancasters, he was posted to 622 Squadron at [RAF] Mildenhall [Suffolk].

“From then on our only time together was brief weekends and the occasional seven days’ leave. By this time he had received a commission [to pilot officer] – but I was still a sergeant and living in my little village. The months passed and, although the subject was never discussed between us, I felt sure my husband must be getting near the end of his second tour.”

However, it was not to be; the dreaded telegram arrived on July 25 1944 to say that he had failed to return from a bombing raid of Stuttgart. It was his 60th trip – and would have been his last of the tour.

“It was six months before I had any further information,” says Grace, “but while no news came through, there was always hope that he had bailed out over France and would eventually get back through one of the escape routes. Every time the telephone rang, I thought it would be for me to say he was safe.”

In fact, after her long wait, Grace was told definitively that the Lancaster, containing her husband and six other men, had been shot down and had crashed at 2.30am on July 25 1944, near Essey-lès-Nancy, killing all the crew. Monte was 28 years old, and on the day he died the couple had been married for one day short of 13 months.

“It was still hard to believe – just a piece of paper saying he was dead, but no other proof. Even when all his personal belongings were returned to me, it still didn’t seem possible that he wouldn’t return and need them.”

Grace also revealed that during their short marriage she had suffered a miscarriage. “It was all very sad,” she says, holding back her tears.

After the war, Grace worked for the Control Commission in Germany, which was responsible for reconstruction in the war-ravaged nation. While there, Grace drove from Dusseldorf to Avrainville in France to visit the graves of her husband and the rest of the crew. They had been buried in an orchard in a small village and the locals had tended their graves, always keeping flowers on them. “At last I was able to accept that my husband would not come back.”

It was while working in Dusseldorf that she met her second husband, Philip Parsons, an Army major, whom she married in Germany in 1947. They were happily married for 56 years, until his death in 2003, aged 85. The couple had two daughters, and Grace also has four grandsons and a great granddaughter.

“My sister and I are very proud of mum, and of Monte too,” says Liz, one of Grace’s daughters. “We think what he did was incredible. I am quite sure Monte was the love of her life.”

Liz’s family has also stayed in contact with Simon Shute, Monte’s nephew, who still has his uncle’s Caterpillar Club badge and certificate (the result of a training accident), awarded to anyone who was successfully bailed out of a stricken aircraft.

Mr Shute, 64, also visited his uncle’s grave in France a few years ago. “Monte was always the popular one and my father, Leonard, who also served in the RAF, named his middle son – my late brother – Montague, as a tribute to his own younger brother.”

I donated to the Bomber Command Memorial appeal because I wanted it built while some flying veterans, now in their late eighties and early nineties, are still alive.

Bomber Command consisted of about 125,000 volunteers from Britain, the Commonwealth and Allied countries. They had to endure some of the most terrifying combat conditions of the Second World War. The average age of the aircrew was just 22 and the youngest were only 18. Three out of every five airmen became casualties: 55,573 men were killed, 8,403 were wounded and 9,838 became prisoners of war.

For me, the remarkable story of Monte Shute and the devotion of his wife, Grace, have brought a human face to these grim statistics. “I was so pleased and proud to see the Bomber Command Memorial unveiled by the Queen,” says Grace. “We all were as a family. For those of us who lost someone, we will never forget.”

Lord Ashcroft is a Tory peer, businessman and philanthropist. His new book, 'Heroes of the Skies’ (Headline), is available from Telegraph Books at £18 + £1.35 p&p. Call 0844 871 1516 or visit books.telegraph.co.uk. All the author’s royalties are being donated to the RAF Benevolent Fund, the custodian of the Bomber Command Memorial
Posted by Cllr Patrick Warner at 14:08