Vote to get safe streets

DESPITE years of “tough on crime” initiatives, most of us feel less safe today than ten years ago.


Four out of five parents won’t let children play outside alone. Most of us feel insecure in our homes.

Faith in police and the justice system has slumped.

So says an important survey by ITV which we report today.

In fact, crime rates are falling. But it doesn’t look that way to the frightened public. So what’s gone wrong?

The Sun believes it’s down to misplaced priorities.

Ask Sun readers why they think law and order is failing them and they will blame soft courts, cushy jails and too few police on the streets.

It’s hard to argue with that.

Why are courts soft? Because the system gives thugs priority over victims.

Why is prison an easy ride? Because jail bosses give priority to Europe’s human rights laws which prisoners manipulate to rule the roost.

Why too few police? Because the Government gives more priority to overseas aid than it does to hiring police: in 2014 it will spend £12.6bn abroad but only £12.1bn on cops.

Despite election pledges from both main parties, the familiar complaint that “you never see a copper round here any more” is depressingly true for many of us.

Our nation can do better than this.

On November 15, a new police and crime commissioner will be elected for each of the 41 police areas in England and Wales excluding London.

It’s the biggest shake-up in policing for 50 years.

The new commissioners will set local priorities and hold forces to account.

If the commissioners fail, they will be booted out by the public. So they have an incentive to be tough.

Trudging out to vote in freezing November is not much fun.

But it might mean your streets once again become safe enough for your kids to play in.

Luckily in Sussex, we have an easy choice to make. We have a great candidate in Katy Bourne standing as the Conservative. 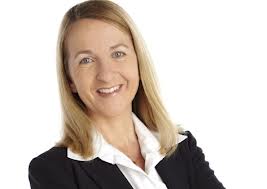 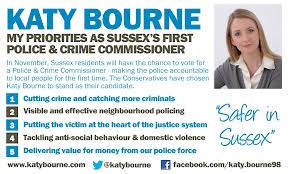 You can find out more about Katy and what se will do for Sussex as our first Police & Crime Commissioner by visiting her website at www.katybourne.com﻿

Posted by Cllr Patrick Warner at 14:23