Lord Bates of Langbaurgh was the Conservative Member of Parliament for Langbaurgh 1992-7, and Paymaster General 1996-7. 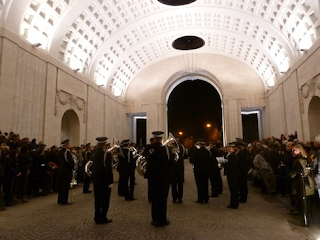 From 7:30pm crowds of residents, young and old, from the small Flemish town of Ypres (Leper) in Belgium empty from homes, bars and restaurants and make their way to the striking war memorial at the Menin Gate to remember those who lost their lives in WW1.

At 8pm prompt the traffic is stopped and the town falls silent. Out of that silence the Last Post is sounded by buglers from the local fire brigade.

The exhortation is then declared:


They shall grow not old, as we that are left grow old:
Age shall not weary them, nor the years condemn.
At the going down of the sun and in the morning,
We will remember them.
A silent minute of remembrance. Wreaths are laid. Reveille is sounded. Heads are lifted. The traffic starts moving and the crowds make their way back.


It has taken place in the same spot since 2nd July 1928 with the obvious exception of the period when it fell under German occupation in WWII when the daily ceremony took place in Brookwood Military Cemetery in Surrey. The very day the town was liberated by Polish forces in 1945 the ceremony was recommenced despite heavy fighting still taking place in other parts of the town.
To attend this ceremony is to leave twice humbled: by the scale of the sacrifice of the 54,896 names chiselled into the walls and then by the devotion of this daily act of remembrance.

As the centenary of the outbreak WW1 approaches surely the time has come for we in Britain and our friends in the Commonwealth to remember the faithfulness of this unique daily tribute from the living generation of one nation to the fallen generation of another.
Posted by Cllr Patrick Warner at 16:05