The Work and Pensions Secretary said big handouts for jobless parents are resented by their hard-working neighbours. 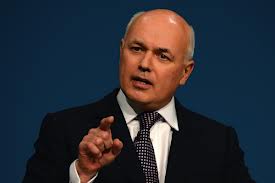 He said: “Most people get up in the morning, work hard, come back late and can only afford to have one or two children.

“They look down the road to the house with the curtains closed, no-one going out to work but lots of kids around. It’s dividing society. The way you bring society back together again is to get the idea of taking responsibility, and fairness for those who pay the bills.”

His comments are the strongest hint yet that the Tories will slash child benefit payouts for more than two kids.

Just one in seven families have more than two children. The former Tory leader said only the richest or poorest 10 per cent of the population have bigger families thanks to big salaries or large benefits.
He added: “Everybody in Britain makes decisions based on what they can afford and how their family life works.

“All we’re saying is you can have as many children as you like, but you need to recognise you have to provide for them.”

Posted by Cllr Patrick Warner at 02:17