Forthcoming MG3 Supermini – seems to have what it takes

in the UK, and as a result, the ’6, despite a sterling performance in BTCC, continues to sell in penny numbers. But the new models are coming – the first is the diesel powered ’6, which really should be hitting dealers in the next few weeks. 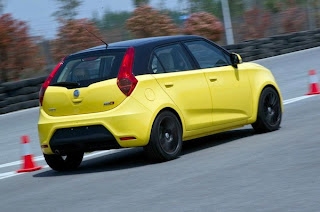 After that, we’ll get the MG3. And as you can see from the picture above, it really isn’t a bad looking thing, even if it’s a little derivative, echoing the Skoda Fabia

and Suzuki Swift. Come the summer of 2013, MG re-enters the supermini sector after years away, and what many of us will be hoping for is that the new car

recaptures some of that Metro spirit that endures to this day. I had a good look over one in Beijing earlier this year, and my overall impressions were that the interior is reasonably well screwed together, and if offered at the right price, it should generate more showroom traffic.
In the two-tone paint job in the image above, it certainlylookssporting enough to wear the MG name-plate. I’m still slightly worried, though – in China it’s offered with a single 1.5-litre petrol engine, and for us range-hungry Europeans, that’s not enough. This lack of choice has blighted the MG6 since its UK launch last year, too. You can have it with a 1.8-litre turbo and that’s it…

Compare that with its closest rival, the Skoda Octavia

, and you’ll see why this has seriously dented the MG6′s chances. The Czech car comes with a myriad of engines

The MG5 looks to be in the same position. Currently it’s offered with a 1.5-litre petrol engine, identical to the MG3′s. It it enough? What do you think? It could change by the end of next year, of course.

Mind you, it’s also frustrating to see that the MG3 is already on sale across the world. Just Google MG Egypt, MG Kazakhstan or MG Chile, for example, to see what I mean. As I say, progress at MG Motor UK doesn’t half look slow… 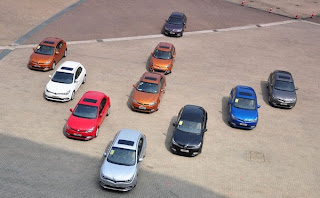 Posted by Cllr Patrick Warner at 08:13