David Cameron was warned last night that Tory backbenchers are plotting a rebellion against a planned 3p increase in fuel duty.

Labour is putting forward a Commons motion on Monday calling for a three-month freeze in the levy, which is already the highest in Europe.

Yesterday Conservative MP Robert Halfon said he would break ranks and vote with the Opposition, and said colleagues were planning to join him.

MPs fear the rise – which was delayed from August – will cause outrage as it coincides with New Year rail and bus fare increases and will come a week before cuts in child benefit hit the better-off.

The possible rebellion comes just days after dozens of Conservative backbenchers defied the whip and voted for a reduction in the EU budget over the next seven years.

Mr Halfon said: 'This is the number one issue raised by backbenchers with the Chancellor of the Exchequer's team because it is causing so much concern.

'I hardly get any emails about the EU budget but I get hundreds about the high cost of fuel.'

John Walker, chairman of the Federation of Small Businesses, said: 'The ever-increasing cost of fuel and utilities is the main cause for rising business costs for small firms.

'We support the call to cancel the 3p per litre duty increase in January and urge the Chancellor to look at this at the Autumn Statement.' 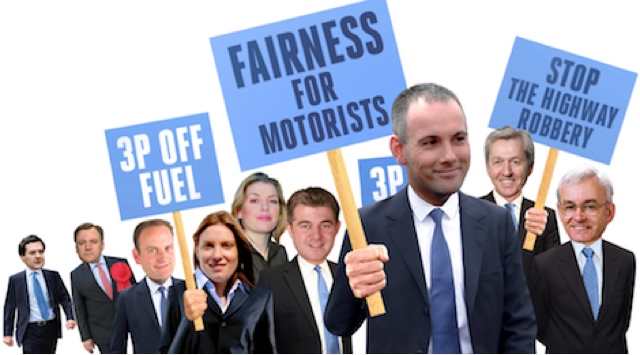 Posted by Cllr Patrick Warner at 01:30