David Cameron made a statement to the House of Commons yesterday, following on from his successful opposition to the EU budget hike proposed by several other member states at a summit last week. The Prime Minister had three main messages.

Firstly, the deal he had rejected:

"Prior to the Council the Commission produced a ludicrous proposal for increasing the commitments ceiling still further to over €1 trillion. We said no. So going in to the Council, the President produced a new proposal: this time a ceiling of €973 billion. As you can see, Mr Speaker, we were making progress in getting the ceilings down. But as I – and other leaders - made clear, it was not enough."

Mr Cameron found the Commission's claims that there were no areas where savings could be made ridiculous:

"For example, when it came to the bureaucratic costs of the European Commission not a single euro in administrative savings was offered. Not one Euro. We need to cut unaffordable spending. The deal on the table was just not good enough and that is why we – and others – rejected it."

Mr Cameron moved on to his second point: why he believes a deal on the European budget is still do-able. He said:
"There is plenty of scope for very significant savings in the Common Agricultural Policy and the Structural and Cohesion Funds. But there are savings to be had in the rest of the budget too. For example, freezing the ceilings for security, justice and external spending would allow €7.5 billion of additional savings."

"A 10% cut in the overall pay bill would save almost €3 billion. Relaxing the rules on automatic promotion would save €1.5 billion. Reducing the extraordinary generosity of the special tax rules for Brussels staff – the levy – that could save around another €1 billion. And changes to pension rights could save another €1.5 billion. All of these are perfectly reasonable proposals. That is why a deal is still doable - and we will push hard for these reductions when negotiations resume next year."

His third point was outlining why it would still be in Britain's interests for us to want any such deal:

"If no deal is reached, the existing ceilings are rolled over and annual budgets are negotiated on a year by year basis, taking account of those ceilings. So crucially, we would not get the reduction we need in the seven-year budget ceilings. The credit card limit would stay beyond what is affordable tens of billions of euros higher even than the deal we rejected at this Council. So it is in our interests to get a deal."

Mr Cameron finished his speech with a defence of the British - and European - taxpayer:

"Mr Speaker, we have put a marker down at this Council. We stood up for the taxpayer. Together with like-minded allies we rejected unacceptable increases in European Spending. And we protected the UK’s rebate. We are fighting hard for the best deal for Britain. And that is what we will continue to do.."

In questions after the statement, Mr Cameron was received with a very warm welcome by Tory MPs. Some backbenchers asked for clarification on the possibility of an in/out referendum. Mr Cameron did not give a direct yes or no answer to the questions, but did say that he would set out his view in his long-awaited Europe speech "later this year". 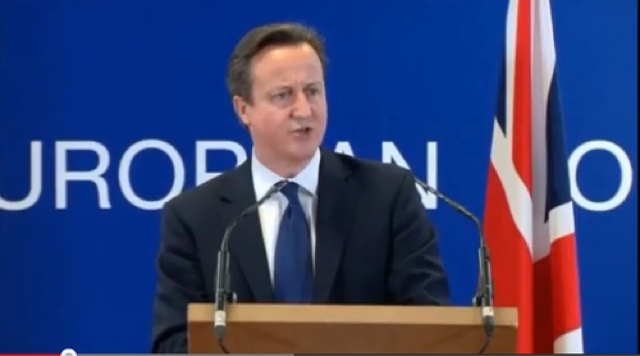 Posted by Cllr Patrick Warner at 01:28