Yes, Prime Minister - Six-part remake bravely sets about absorbing the changes that have occurred in British society since 1980

On screen, James Bond has just turned 50. The Rolling Stones are 50 too and still rolling at the O2 Arena. In one form or another Yes, Minister is a mere 32 on BBC2 and its original stars, Paul Eddington and Nigel Hawthorne, are both dead. But when the nostalgia industry calls for a remake, who's worrying about details? 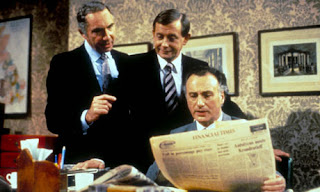 Step forward Anthony Jay (the Tory one) and Jonathan Lynn (the Labour one), writers of the original 38 cult episodes, and the classic comedy channel, UKTV's Gold channel. Together they have created a six-part remake which bravely sets about absorbing the changes that have occurred in British society since 1980 when Eddington's Jim Hacker was still an ambitious, bumbling cabinet minister and Hawthorne's Sir Humphrey Appleby was his permanent secretary and Jeeves.

The coalition, the eurozone crisis, devolution – there's plenty of material for the writers to blend into the familiar sitcom format. David Haig's Hacker is still PM (as he was from 1986-88), but in the first episode – aired before a VIP-laced audience in a Mayfair hotel last night – he is found grappling with a eurozone summit at Lancaster House.

Hacker acts in his capacity as (let's get this right, it's one of the jokes) rotating EU council president, as distinct from Herman Van Rompuy, who – as every Belgian schoolboy knows – is president of the European council. It looks like being a disaster (summits are not there to achieve success "but to conceal failure", explains Henry Goodman's suave Sir Humphrey) until a €10tn oil pipeline from a dodgy central Asian republic makes its appearance.

Lots of material, then, for Yes, Minister's guiding principle, the gentle satire on a governing system in which elected politicians are outmanoeuvred by their more worldly, unelected officials. The new series is itself a reworking of a 2010 stage version, located in Chequers with what looks like the same set.

But we live in harsher times, and the shadow of The Thick of It, a much coarser, more nihilistic TV satire, invites cruel comparison. Yes, Minister always had a point of view, the well-meaning British genius for muddling through. When viewers inspect the remake, will they still find it funny after Alastair Campbell and Andy Coulson?

The oldies will certainly be satisfied; younger viewers accustomed to the savagery of social media less so. Humour that relies more on manipulation of constitutional niceties and verbal dexterity is more demanding than the pyrotechnic effing and blinding of Peter Capaldi's Malcolm Tucker. The opener was a touch didactic, but Jay and Lynn make a decent stab at moving with the times, slipping in iPads and a Paxmanesque TV duffing for Hacker.

Chris Larkin plays Bernard Woolley, Hacker's diligent principal private secretary with his torn loyalties, and does so engagingly. In another gesture to changing times, Zoe Telford is introduced as sharp Claire Sutton, Hacker's politically appointed special adviser or "spad", though one member of the audience – former cabinet secretary, Lord Butler, no less – pointed out that the early series had an older woman adviser, Dorothy Wainwright (real-life Marcia Falkender?), too. Politicians and officials, even humourless Mrs T, loved this show.

It is Lynn's contention that The Thick of It was a sitcom for the Blair-Campbell moment and his implication is that Yes, Minister/Prime Minister will last much longer. He's probably right; it is Whitehall's Jeeves and Wooster, after all. And life goes on imitating it. Before David Cameron's last reshuffle, Francis Maude's officials drew up a memo for his expected successor. But Maude survived, heard of the memo and demanded to see it. Drop Maude's plans for reforming the civil service, it advised. Pure Sir Humphrey.

Yes, Prime Minister will be on Gold from mid-January.
Posted by Cllr Patrick Warner at 04:17