The Bank of England has said it will give the Treasury the interest it earns on certain government debts it holds.

The Bank owns £375bn in gilts due to its quantitative easing (QE) policy of buying up debt to boost the economy.

The transfer will cut the government's borrowing needs and the net debt it reports in its financial accounts.

As of last March, the Bank held £24bn in cash received from government interest payments, a figure expected to rise to £35bn by next March.

The Bank has been purchasing government debt from the market with newly printed money as part of its QE policy since March 2009.

The interest income ultimately belongs to the government under the terms of an indemnity provided to the Bank, but until now, the cash has been sitting unused in a dedicated account - the Asset Purchase Facility (APF) - at Threadneedle Street.

"Holding large amounts of cash in the APF is economically inefficient as it requires the government to borrow money to fund these coupon payments," said the Treasury upon announcing the agreement.

In future, any additional interest payments received by the Bank will be handed back to the Treasury at the end of each quarter, after deducting the Bank's own cost of borrowing.

This is likely to reduce the government's budget deficit by about £11bn a year, based on the Bank's current cost of borrowing, according to the BBC's business editor, Robert Peston.

That compares with the £116bn public sector net borrowing for the current tax year that was forecast in March by the Office for Budget Responsibility.

In a letter to Chancellor George Osborne, the Bank's governor, Mervyn King, pointed out that, because of the way that the APF functions, the Treasury may well end up having to repay the cash, and more, in future.

This would occur if the Bank of England raised its own interest rate - which it uses to set monetary policy - to a level where it was paying more interest on its own borrowings than the AFP was earning on the government debt it holds.

The move comes a day after the Bank decided at a monthly policy-setting meeting not to extend its QE programme.

The Treasury said that the agreement was in line with the practice in the US and Japan, where central banks have been buying up their respective governments' debts as part of a QE programme. 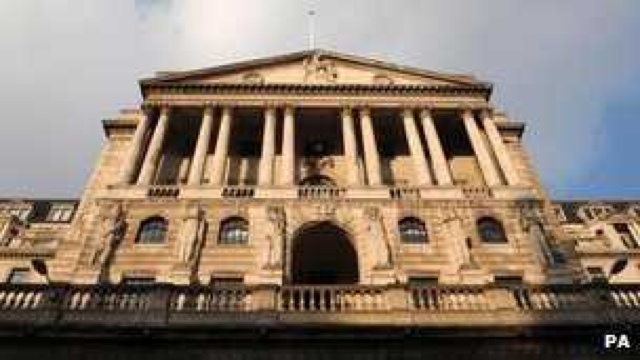 Posted by Cllr Patrick Warner at 01:46