James Bond star Daniel Craig has surprised UK troops at Camp Bastion in Afghanistan by coming to visit them as they prepared to watch his latest film.

Some 800 soldiers, sailors and airmen were waiting for a screening of Skyfall when the 007 star arrived.

Craig was given a tour of the camp after a brief introduction of the latest Bond film to the audience.

He met soldiers and saw some of the training they undergo before they deploy to forward operating bases.

The star was driven around the camp in a Foxhound vehicle by Warrant Officer Class 1 Rob Ingham.

"We get quite a lot of visitors here, but having James Bond was special," said WO1 Ingham.

"He seemed to be pretty comfortable in the driving seat."

At the weapons range Craig was given the chance to fire some of the machine guns used by UK forces.

He also met staff and patients at the Camp Bastion hospital.

Pte Scott Craggs, 23, from Newcastle, a combat medical technician said: "It was really good morale for everyone - it's a decent thing for him to take time to come out and visit everyone here."

The star's final stop was a demonstration of the techniques used to search for bombs and he used the detectors himself to search for buried training devices. 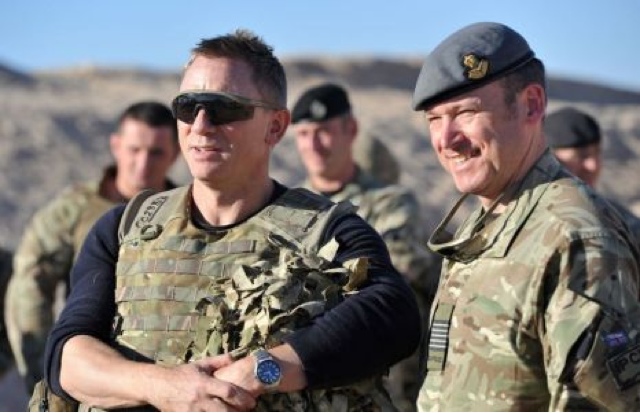 Posted by Cllr Patrick Warner at 15:07